Cyril Thèvenau, man of the sea

Free man! The sea is to thee ever dear! (You will always cherish the sea.) These lines of verse from the poet Charles Baudelaire apply marvellously well to Cyril Thévenau! Born in Mauritius in 1953, he has always lived by the sea, rocked by the waves of the Indian Ocean’s that collide with the protective coral reefs of the island before sweeping its shores

From a very young age he devoted himself to the pleasures of the sea. Led by his parents, he would hit the waves in Tamarin Bay. The first navigators knew not to trust this deceptively peaceful bay off the sheltered South West coast with its unpredictable waves.

Some Mauritian families had chosen to establish their holiday home on the leeward South West coast. The Thévenau family made it home! With its dry and hot weather, where fishing was good, many would go to the Bay and defy the waves or do some body surfing on a simple board made of plywood…

This art of riding the waves was already deeply rooted in the Pacific traditions for centuries. Surfing, a ritual activity then became a sport in 1912 thanks to Duke Kahanamoku, an American champion swimmer born in Hawaii.

After World War ll, surfing caught on in the U.S, first in California, then in Australia, in the South West of France and in South Africa. Mauritius discovered Surfing in 1962 thanks to Joel de Rosnay,  a Mauritian that lived in France. He was the first surfer in Tamarin. Then the first surfboards arrived from South Africa or Australia and were imported by Serge Koenig who also was amongst the first surfers of Tamarin. Locals too started to “walk on water”…however the discipline remained the hobby of a few surf addicts.  Its popularity expanded in the late 60’s.

At that time Cyril Thevenau was a teenager, with some friends of his age, Albert Koenig, Jean-Claude Staub, Louis Paul Maujean and Jean-François Rey, as well as with his brother Jean-Marc, they would look up to their elders surfing in Tamarin Bay, considering them as “half gods.” When the elders were at work, the young ones would secretly borrow some boards that were stored in a bungalow shed (that later became the location of the Tamarin Hotel). They were bulky, long boards that Cyril and his friends would carry on their heads to the beach. 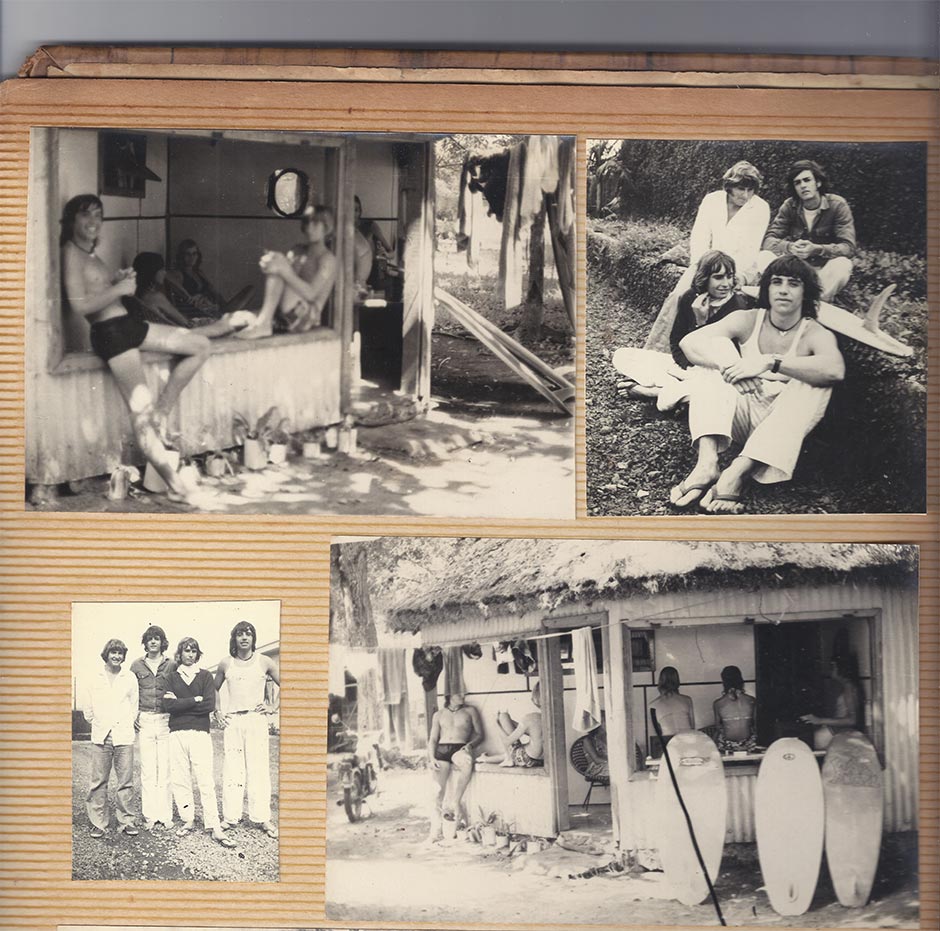 Cyril waited until 1971, when a group of Australian and South African surfers came to the island, to buy his first surfboards. Boards that he would then pass on and sell to be able to purchase new ones. For Cyril and his friends, it was a period of discovery, of excitement, where they would share the experience of being together facing the waves and the dangers of the sea. They were not afraid to venture to the more challenging spots in the south of Mauritius, at the Morne or Jacotet Bay.

The surfing world was also discovering Tamarin. Joey Cabell from Hawaii, world champion in 1964, most probably one of the most complete surfers of the early 70’s came to tackle that left wave from Tamarin, known as Dal. Together with Larry and Roger Yates, Greg Weaver and Spider Wills, some surf film specialists they started the making of the Forgotten Island of Santaosha where Cyril Thévenau makes a short appearance surfing a beautiful tube on Tamarin’s reefs. It was in 1972 then when Mauritius became visible on the surf’s world map and Cyril became famous in the local surf community.

In the 70’s, a wave of Hippies, mainly Australians and some Californians, spread in Tamarin. More and more people could then be seen riding Dal’s left wave. One should patiently wait for the swell that deigned come to Tamarin Bay only for 50 or 60 days a year. Always hungry for more waves , this was not enough to satisfy Cyril Thévenau’s appetite. During the winter of 1974, two friends from Reunion Island, Jacques « Bereck » Lustrat et Frank Arnaud, introduced him to St Leu’s left wave on the South West coast.

At that time, there were very few surfers in Reunion and most of them gathered around St Gilles. When Cyril arrived on the sister island, he did not restrict himself to the West coast shores; he also discovered a string of spots down south. He finally decided to leave Mauritius to enjoy the high level/intensity of surfing in Reunion that offered much more regular swell entries than in Tamarin. This was the time for this young Mauritian to start a new life but at the heart of which he had the same passion, that of surfing!

He settled in St Leu in 1979, at Jean-Marc’s (his brother who lived there since 1972 and whom he had often visited). He had a great time surfing that left wave that he had discovered in 1974. The Mauritian surfer became a superstar among the locals who had seen him in the movie Santosha… They would borrow surfboards from him and learn about the latest trends… The idea then came to him to surf on this wave of popularity and to open a shop specialized in surf equipment and surf wear.

The first surf shop opened its doors in 1982 in a small 18m² store located in St Gilles, on Roches Noires beach. He was backed up by the Australian Bruce Raymond, one of Quicksilver’s bosses, the reference brand of Surf worldwide. He also represented the brands Rip Curl for the wetsuits and Ocean & Earth for the leashs. The surf boards were made and customised by the South African designer Spider Murphy. His new adventure did not stop him from surfing. He kept skimming the waves, St Leu’s left as well as that of Etang Salé, Hermitage and even that of St Paul’s Bay in rough weather.

The 80’s saw a surf boom in Reunion. More and more young people dived into the water, new clubs emerged and the level improved. A new twist was also taken in Tamarin where new behaviours arised, surfers became more radical and wanted to take more waves than the others, which was not so clearly established in the 70’s.This earlier surf spirit of sharing was starting to disappear. Both in Reunion and Mauritius, those who took control of the spots would take all the biggest waves and apply their rules, sometimes even creating a climate of fear. This was the start of aggressive localism, more inherent in Mauritius than in Reunion though.

Cyril would often go back to surf in Tamarin. Especially when the spot was too congested in St Leu. He would hop on a flight back to Tamarin’s left that he missed so much. In 1983, he made one of his dreams come true by surfing in Hawaii. He went with his buddy François Xavier Maurin, to Pipeline, Sunset Beach but mostly on the spots of Haleiwa where it was less crowded. Then came the surf trips in Australia or in South Africa. Well, Cyril’s life revolves around three things: surf, travel and sharing…

After twelve years of such a busy lifestyle, he decided to expand his business and to open a shop worthy of its name! This meant he had to compromise and give less time to his passion in order to make his business work. Competition was fierce. The small premises of Roches Noires became a real surf shop, the one of a kind, bearing the name of High Surf. He was forced to spend long hours working. And after a few years, his efforts paid off!

However the call of the ocean was still strong. More than being a privileged sports field, or his work place, the sea meant so much to Cyril. Mood stabilizer, contributing to his balance, soothing and fulfilling him.

At the end of the day, being a shop manager was not what suited him best, he decided to shift his ground. What he really wanted was to be able to share his love of the ocean, his passion for surfing to other’s – mainly to the new generation. Cyril not only was an excellent surfer but a visionary. In 2001, he sold his business to get his certification as a French State Monitor. He then opened a surf school with his partner’s support Quicksilver in the west of Reunion in Trois Bassins. He succeeded once more, to such an extent that he wanted reach more surfers. That is when he established the first feminine surf school of France, and of Europe!

Just like any self-respecting Mauritian, Cyril forgot neither his family nor his island. Mid 2000, he helped his brother Roger who had just opened the first surf school of Tamarin, in collaboration with Cyril Michel, manager of the Tamarin hotel. He brought surf boards from Reunion for him. Dal’s left kept on attracting surfers worldwide, despite the enhanced localism and rare waves. A community of expats rooted themselves in the village where the children grew up in the waves wanting to find their way to the line-up.

Thus, when Roger had to stop operating as a monitor in 2015, Cyril himself gave a new boost to the Tamarin Surf School. It seemed like perfect timing, due to several shark attacks since 2011, he was out of a job as many surf schools had to close. After 33 years in Reunion, it was time for Cyril to return to where he belonged.

In Tamarin, the less wealthy children from the village were integrated into the school. He also made the stand-up paddle, a new craze, more popular. The school was then included as part of the newly refurbished hotel in 2018, which is now managed by the Veranda Resorts group, the Veranda Tamarin.